Our Partnerships are very important to the development and optimization of OVR Technology products. Together with those who share our core mission and vision, OVR Technology is creating cutting edge scent technologies to enhance the human experience. We encourage those who recognize the important role of scent in the advancement of cognitive and behavioral scenarios to contact us to learn more about early adoption and partnership opportunities.

“Virtual scent is in many ways the new frontier. Olfaction is such a powerful cue for presence, as well as for priming memories."

"The application of OVR’s technology to readiness activities is revolutionary and serves to enhance the realism of training environments and end-states."

“The perfect team for us to partner with and I think [Bravemind] is an ideal application to really put their system through its paces. I think it’s going to make the therapy much better for the wider masses that this is applied to.”

"Olfactory virtual reality is one of the greatest storytelling tools that has ever been invented.”

“One of the final pieces of the puzzle to full immersion, scent is a really primal experience and it gives us a lot of spatial cues and other tools for navigating the world.” 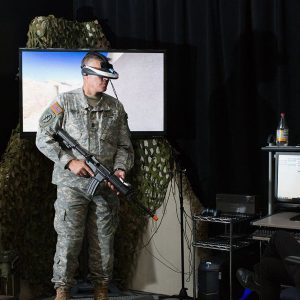 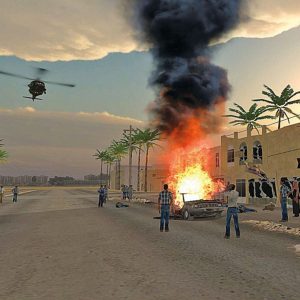 Exposure therapy, in which a patient – guided by a trained therapist – confronts their trauma memories through a retelling of the experience, is now endorsed as an “evidence-based” treatment for PTS. ICT researchers added to this therapy by leveraging virtual art assets that were originally built for the commercially successful X-Box game and combat tactical simulation scenario, Full Spectrum Warrior. The current applications consist of a series of virtual scenarios specifically designed to represent relevant contexts for VR exposure therapy, including Middle-Eastern themed city and desert road environments. In addition to the visual stimuli presented in the VR head mounted display, directional 3D audio, vibrations and smells can be delivered into the simulation. Now rather than relying exclusively on imagining a particular scenario, a patient can experience it again in a virtual world under very safe and controlled conditions. Young military personnel, having grown up with digital gaming technology, may actually be more attracted to and comfortable with a VR treatment approach as an alternative to traditional “talk therapy”.

The therapy requires well-trained clinical care providers that understand the unique challenges that they may face with service members and veterans suffering from the wounds of war. Stimulus presentation is controlled by the clinician via a separate “wizard of Oz” interface, with the clinician in full audio contact with the patient. ICT researchers are also adapting the system as a tool for stress resilience training and PTS assessment.
This basic and applied research effort has been funded by ONR, TATRC, USAMRMC and the Infinite Hero Foundation. Collaborators include JoAnn Difede, Weill Cornell Medical Center; Barbara Rothbaum, Emory University; Virtually Better, Inc. and OVR Technology.

Could your business or research benefit from Olfactory Virtual Reality?